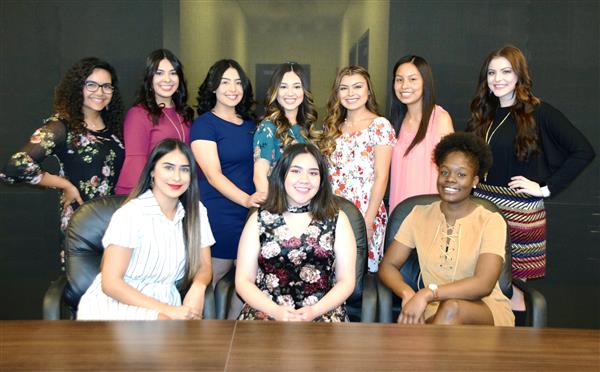 This prestigious award, established this year in memory of the “First Lady of West Texas” Nelda McQuien Laney, recognizes a senior girl who is in good standing at PHS, exhibits the traits of leadership and good citizenship, and  is involved in student organizations at Plainview High School.

Nelda Laney graduated from Plainview High School in 1961 and with honors from Texas Tech University in 1965.  She was married to former Speaker of the Texas House of Representatives James “Pete” Laney for 53 years. She served as National President of the Texas Tech Alumni Association and Chair of the Merket Alumni Center expansion. She created a series of collectible Texas Capitol ornaments for the continued preservation and educational programming of the Capitol. Between 1996 and 2002, Nelda handled all phases of the project and sold more than 300,000 ornaments generating more than $2 million for the Texas Statehouse. She served on the boards of The Texas Book Festival, Friends of Texas Library and Archives, National Center for Missing and Exploited Children,  and Greater Texas Community Partners.

Nelda was a member of numerous organization including Kappa Alpha Theta, the Omega Delphi Study Club, and Caprock District Women's Club. She served as co-chair of the Capitol Fund Drive, which raised private funds for furnishing the renovated Texas Capitol, and as vice chair of the Texas Capitol Restoration Celebration. Nelda was honored with the Lauro F. Cavazos Award by the Texas Tech Alumni Association, was a Texas Tech University College of Education Distinguished Alumni and was the first recipient of the Woman of Achievement Award from the Texas Federation of Women's Clubs. She also received a Special Recognition for her work on the Capitol Restoration by the Texas Women's Alliance and was a recipient of the Star of Texas Preservation Award for Capitol Restoration. She was named Woman of the Year in Plainview and Hale Center, inducted into the Future Homemakers of America Texas Hall of Fame and honored as a Lifetime Member of the Girl Scouts.

Profiles of the nominated seniors:

Jaylee Campos, daughter of Sonia Benavente and Juan Campos,  plans to attend Texas State University to major in radiation therapy. She has been active in volleyball and band. She is a Plainview Symphony Guild debutante. She has also participated in FCCLA (Family, Career and Community Leaders of America), NSHSS (National Society of High School Scholars),  the pharmacology program, and Snack Shak.

Dareli Chavez, daughter of Maria Flores and Guadalupe Chavez, plans to attend South Plains College and major in nursing.  At PHS, she has participated in band and cheer. She is currently enrolled in a CNA (Certified Nursing Assistant) course. She attends Sacred Heart Church and has volunteered at the hospital and local nursing homes.

Anahi Cordero, daughter of Patricia Cordero and Lorenzo Cordero, plans to pursue a degree in education with plans to become an English teacher. She has participated in varsity volleyball and has worked as a volunteer for the hospital and for Meals on Wheels.

Bethany Gamez, daughter of Rojelio and JoAnn Gamez, plans to attend Angelo State University where she will major in education. She is a member of the Student Council and FCCLA (Family, Career and Community Leaders of America).

Lucy Hernandez, daughter of Fernando Hernandez and Lucia Hernandez, plans to attend Rice University where she will major in mechanical engineering. She hopes to have the opportunity to intern at NASA and work as an aerospace engineer. At PHS, she has been involved in art competitions, speech and debate, Upward Bound, Spanish Club, National Honor Society, and donated time as a volunteer.

Mahogany Nails, daughter of Damien and Belinda Nails, plans to attend Texas State University  and possibly major in astronomy.  At PHS, she has participated in varsity volleyball, varsity basketball, and varsity track.  She is involved in DECA, FBLA (Future Business Leaders of America), National Honor Society, band, and Snack Shak.

Trini Perez, daughter of Johnny and Carmen Perez, plans to attend college and major in mass communications and public relations with a minor in education. She is a member of the PHS band where she serves as a color guard captain and is the reporter for the band leadership team. She serves as captain of the softball team and played on the volleyball team as a freshman. She is a Symphony Guild debutante, 2nd vice-president for Student Council, Public Relations Officer for FCCLA (Family Career and Community Leaders of America), and an active member of St. Alice Catholic Church.

Lauren Pritchard, daughter of Brandon and Shanna Pritchard, plans to study pre-pharmacy or nutrition at Texas Christian University. At PHS, she participated in volleyball, basketball, track, golf, and the pharmacology program.  She is a Symphony Guild debutante and a member of the Student Council, the National Honor Society, the National Technical Honor Society. She has also served as a volunteer for Snack Shak.

Tabbatha Riojas, daughter of Susana Gomez an Joey Gomez, plans to attend Midwestern State University and major in business management and marketing. She was on the track team her freshman year, She is a Symphony guild debutante. At PHS, she participated in Student Council, Spanish Club, Forensics Club, FBLA (Future Business Leaders of America). She has also taught Sunday School at St. Alice Catholic Church.

Yasmine Soto, daughter of Cassandra Chavez and Adrian Soto, plans to attend the University of Texas in San Antonio where she will major in business and finance. She played volleyball and participated in choir. She has been involved in numerous campus organizations including NTHS (National Technical Honor Society), FBLA (Future Business Leaders of America), FCCLA (Family Career and Community Leaders of America), and NSHSS (National Society of High School Scholars).